CUNDA (ALIBEY) ISLAND: THE ISLAND WITH THE UNIQUE ATMOSPHERE 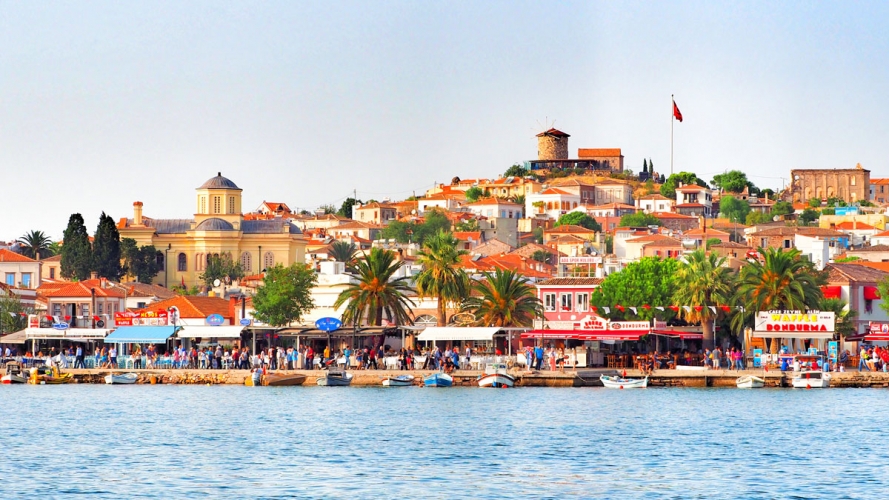 The natural beauty and cultural heritage of Cunda Island are cherished and assiduously maintained by its people.

A causeway connects Ayvalık to Cunda Island, but maritime-minded visitors might enjoy a trip on one of the boats that ply the sound. The unique and friendly atmosphere of the island instantly surrounds you.

As you approach the historical parts of Alibey Island you come face to face with a truly rich cultural heritage.

Archaeological excavations at Alibey Island indicate that there were settlements in the area in the Early and Late Bronze Ages and in the Iron Age. Following the Ionic Migration, Aeolian tribes settled on Cunda and other islands. Traces of human settlements have led scholars to the opinion that the most prominent islands of the archipelago were Maden Island (Pordeselene), Çıplak Island (Chalkys), and Cunda (Nesos) Island. The archaeological evidence also shows that Nesos maintained its importance during the Roman and Byzantine eras. The island lost its position during the Middle Age because of the threat pirates´ raids. The threat receded towards the end of the Middle Age, and the development of the island resumed. The famous geographer and cartographer Piri Reis described the islands as the "Yunt Islands" in his Book of Navigation (Kitab-ı Bahriye, 1521) and referred to Cunda by the same name. According to the records of the Ottoman State, the name was officially registered as Yunda, although the name used in day to day speech became "Cunda". Researchers refer to Cunda in the 18th and 19th centuries as a rich settlement independent of Ayvalık, and an urban island in the Mediterranean. In the 19th century immigration from Crete and Lesbos islands helped preserve the unique culture and physical heritage of the island. The name of the island was changed from "Cunda" to "Alibey" as a tribute to Ali Çetinkaya, who, as commander of the 172nd Regiment during the first days of the War of Liberation, organised the defence of Ayvalık.

Reaching Alibey Island from Ayvalık, either by sea or by road brings visitors to the peace and tranquillity of the historic island sanctuary. Churches and monasteries dot the island. The Taxiarchis Church is the largest of the island´s churches. The church´s architecture is still impressive, and its great bell is on display at the Museum of Bergama.

The natural beauty and cultural heritage of Cunda Island are cherished and assiduously maintained by its people, and make the island a major draw for visitors. The higher parts of the island provide many vintage points overlooking narrow sounds, little islands and enchanting coves along the intricate, lace-like shore.

Visitors should enjoy fresh seafood and vegetables in the island´s restaurants, especially the popular fried sprat (papalina) dish, fresh herbs and vegetables cooked in olive oil, and the wide selection of starters (meze). Having a dinner in one of the traditional or modern restaurants with an outstanding view is unforgettable.