BEYOGLU: CENTRE OF ENTERTAINMENT AND LIFE 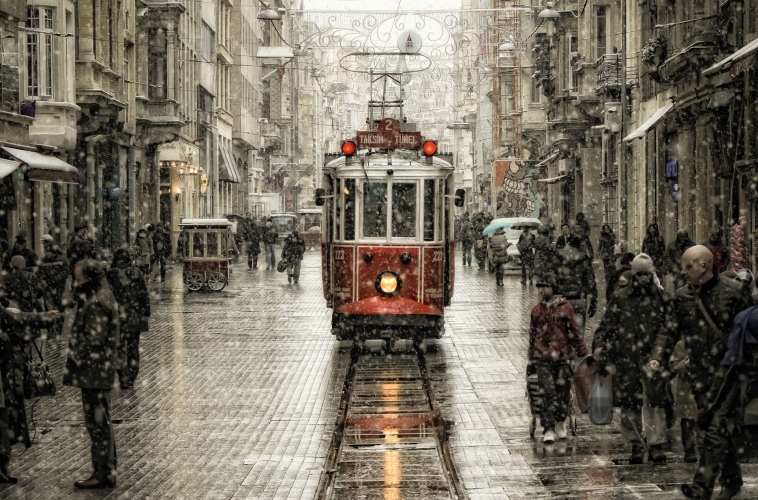 During the late Ottoman Period, the European tradesmen, followed by the embassies community left the confines of Galata Walls surrounding the Galata port area, and created a new cosmopolitan development at Beyoğlu (Pera) along the lines of European cities, where diverse nationalities come together. The area of the settlement was referred to as Pera by seafarers and embassies community. The term means ‘the other side’ and refers to the area outside the old city. It is interesting to note that such a bustling part of today’s İstanbul was previously viewed as a distant corner. The name Beyoğlu (meaning a lord´s son) was associated with the son of a Byzantine emperor or an ambassador of Venice who once settled in the area.

The European-style mansion houses that can be found in Beyoğlu were built by European tradesmen and ambassadors who settled in İstanbul. As there used to be frequent fires devastating the region, it was prohibited to build wooden buildings; and the beautiful buildings that have survived to the present day generally date to the time after that ban.

Beyoğlu once used to be outside the Galata Walls. It was connected with other areas through new roads following the demolition of the walls, and its importance increased significantly. It is known that even in the early Ottoman Period there were entertainment venues in the vicinity, where seamen could enjoy the facilities before their long sea journeys. At present, entertainment venues, art galleries, cinemas, theatres and concert and live music performance halls make it a cultural hub. Many cafés with street tables, as well as street performers mix in with the din of the crowds to create a street orchestra. Sometimes the streets become a veritable open-air exhibition.

İstiklal Avenue is one of the liveliest streets of İstanbul. Every day thousands walk through it. The only vehicular movement breaking the flood of human activity is the nostalgic thread of tramlines. Both sides of the street are lined with art galleries, famous shops selling accessories and jewellery, cafés where lively talk goes on and passages where drinking dens are situated. Most of the buildings identified with the avenue as well as the passages were built at the turn of the 20th century under the influence of the art nouveau movement, which was at the height of fashion then. Beyoğlu together with Galata is closely associated with Europe and any new trend or fashion was quickly adopted there. The pilaster sculpture and some self-standing statues decorating the façades of the period buildings are worth close examination. At the mid-section of İstiklal Street the crowd thickens. The place where seafarers from diverse lands met during the Byzantine and Ottoman periods is today one of the most popular areas.

An interesting route from the terminus of Tünel (funicular) first leads you to Galata Mevlevihanesi (House of Mevlevi Sufi Order), in other words the Museum of Divan Literature situated at Galip Dede Street. The Mevlevihane was built in 1491 by Mehmet Dede, the grandson of Mevlana Celaleddin-i Rumi who had a particular place in history on account of his teaching and philosophy. Despite being devastated in firestorm and other disasters the building, with repairs and renovation, has survived to our own day. On the first and last Saturday of every month, the Sema ritual (of whirling dervishes) is performed at the Semahane (ritual hall) section which is also used as a museum. In the Mevlevihane are also the cells of the dervishes who devoted themselves to the Mevlevi Order as well as a library. The tombs of masters and dervishes are in the courtyard. For those who wish to learn more about Mevlevi Order, a visit to the museum is a must, with its exhibits of artefacts relating to Mevlevi culture, classical Turkish musical instruments and illuminated manuscripts. The Tomb of Galip Dede is in front of the Mevlevihane.

As in Ottoman times, the Consulates are lined up along the Beyoğlu. They were all built during the late Ottoman Period. When the capital moved from İstanbul to Ankara the embassies too moved; however, the buildings of embassies still stand and they are used for different purposes today. Some of the Consulates have churches or chapels in their courtyards for their religious rituals.

One spot famous for its cafés and bars of the İstiklal Street is Asmalımescit Road. One of the oldest hotels of İstanbul, the Pera Palas, is next to the never-sleeping entertainment hub. Next to the hotel is the Museum of Pera which houses paintings of famous Ottoman artists.

One of the most famous meeting points in İstiklal Street is the Çiçek Pasajı (Flower Passage), opposite the Galatasaray Lycée. The tables are always full, with customers of all ages busily chatting. To reach Cezayir Street you walk down the slope following the walls of Galatasaray Lycée and turn left.

The passage buildings illustrate the special atmosphere of the İstiklal Street. Most of them were built in the late 19th century or early 20th century, and each one has its own surprises. One of the most interesting buildings is Halep Pasajı where a pilaster sculpture of a clown adorns the façade. The clown is actually a clue as to the original use of the building: it was formerly a circus. The famous Beyoğlu Cinema can also be found in that building.

In İstanbul the overwhelming Christian community is Orthodox. One of the grandest churches in İstanbul, Aya Triada (Holy Trinity) near Taksim Square is a Greek Orthodox Church.

Taksim Meydanı (Taksim Square) is at the end of İstiklal Street. The square was the water distribution centre of İstanbul in the past and so it took the name Taksim which means distribution in Turkish. It is one of the busiest places in İstanbul, and never sleeps.

If you walk from one end of İstiklal Avenue to the other you will not have savoured it fully. So go back, walk slowly, visit the passages, sit in its cafés, bars and drinking dens and enjoy Turkish meze (starters) with your drink. After sunset walk the street once more. The crowd will be moredense and the taste of the street different as the oriental music pouring out of the bars will take you to other worlds.