NEVŞEHIR: CREATED BY THE HAND OF NATURE 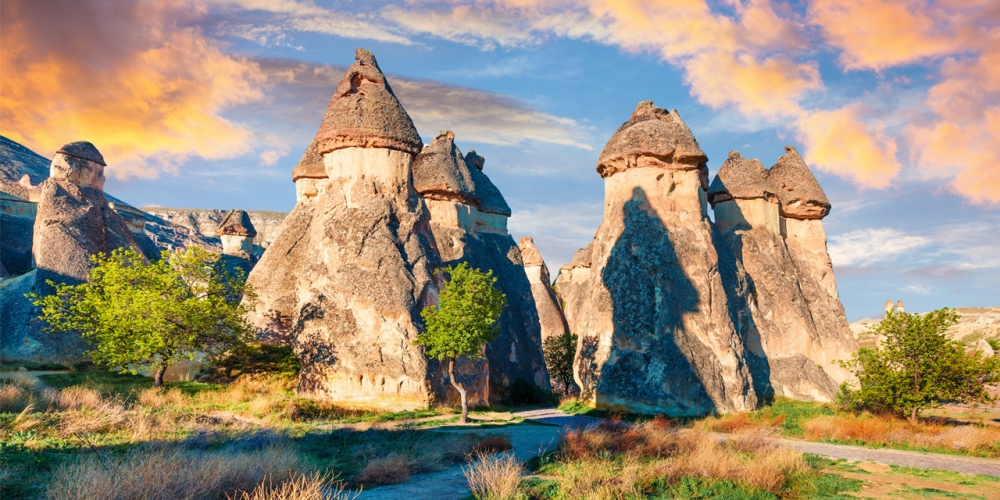 Most of the region’s fairy chimneys and rock-cut churches are found in Nevşehir, scattered around the districts of Ürgüp, Avanos and Göreme. With a spectacular landscape entirely sculpted by erosion, the Göreme Valley and its surroundings contain rock-hewn sanctuaries that provide unique evidence of Byzantine art in the post-Iconoclastic period.

Göreme and its environs, located 10km from Nevşehir, are thought to have been used as a necropolis by the inhabitants of Venessa (Avanos) during Roman times. The churches of Durmuş Kadir, Yusuf Koç, El Nazar, Saklı, Meryem Ana (Virgin Mary) and Kılıçlar cast a spellbinding effect on visitors. The Göreme Open Air Museum is where the ideas of Christianity were unified by St Basil the Great and his brothers.

The architectural details and frescoes of the Tokalı church, Convent of Monks and Nuns, Chapel of St Basil and the Elmalı, Yılanlı, Karanlık and Çarıklı churches seem as alive today as when they were new.

Çavuşin, located 2km from Göreme, is one of the oldest inhabited places in the region and the fresco scenes of Çavuşin church are distinctive because of their unusual compositions.

In Ürgüp, 20km east of Nevşehir, the St Theodore (Tağar) and Pancarlık churches are elaborately decorated with religious art. Six kilometres south of Ürgüp is Mustafapaşa (Sinasos), a town justifiably famous for its splendid stone works. The Chapel of St Basil is decorated with motifs reflecting the Iconoclastic system of thought. A hot-air balloon in a voyage unique to the Cappadocian region is an experience unlike any other as you race with the doves through the sky’s shades of blue and behold below the sinuous terrain extending into infinity, the enigmatic and artistically magnificent churches, and the pyramids, cones, mushrooms, and hats of the fairy chimneys. Ürgüp is also known for its wines that have been made in the area for thousands of years and visitors can’t resist the taste of the crimson-red or misty-white wines from the fertile vineyards in which the grapes of the Cappadocia region flourish. Although some local vintners have adopted modern techniques of wine-making, there are still many that remain faithful to ancient and time-proven methods.

Ortahisar, 6 km from Ürgüp, is home to the once strategically important Ortahisar citadel with fine examples of Cappadocia´s vernacular architecture clustered around its base. Another must-see sight is the Üzümlü Church on the western side.

With the arrival of Islam in Anatolia, it also became the home of a number of famous Muslim scholars and philosophers. In the 14th century the Turkish and Muslim mystic Hacı Bektaş-ı Veli settled in the Nevşehir county known as Hacıbektaş today. The core tenets of this sage´s philosophy, crucial to achieving unity among the different Turkish groups in Anatolia, embody the spirit and substance of the 1948 Universal Declaration of Human Rights. The town of Hacıbektaş, 45km from Nevşehir, has a 14th-century mosque complex that includes the tomb of Hacı Bektaş-ı Veli, a mosque, guesthouse, kitchen, wishing tree and an area for ascetics. The complex which is now a museum has been inscribed in the Tentative List of UNESCO´s World Heritage.

On 16-18 August every year, activities commemorating Hacı Bektaş-ı Veli are held and draw large crowds of his disciples as well as interested visitors.

Located 18km from Nevşehir, Avanos is famous for its tradition of pottery-making that has been alive since the times of the Hittites. If you want to give it a try, call in at a workshop, and take up your position before the wheel. What happens next is up to the skills of your hands and the vividness of your imagination. Master potters standing nearby will lend you their support and maybe give you a few pointers.

When you leave, don´t forget to pick up an example or two of the craftsmen´s work as a memento of your time there. 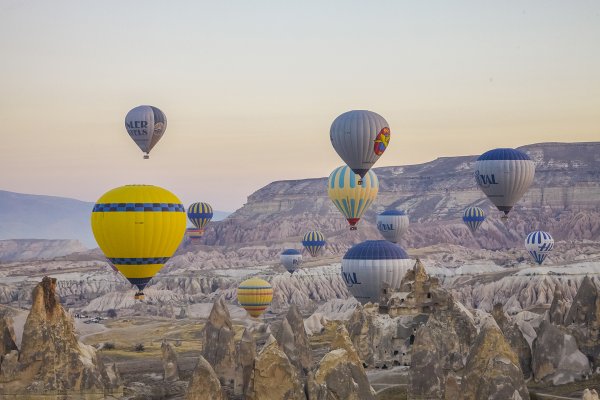