IHLARA (PERISTREAMMA) : THE LONGEST ROAD FAITH AND CULTURE IN CAPPADOCIA 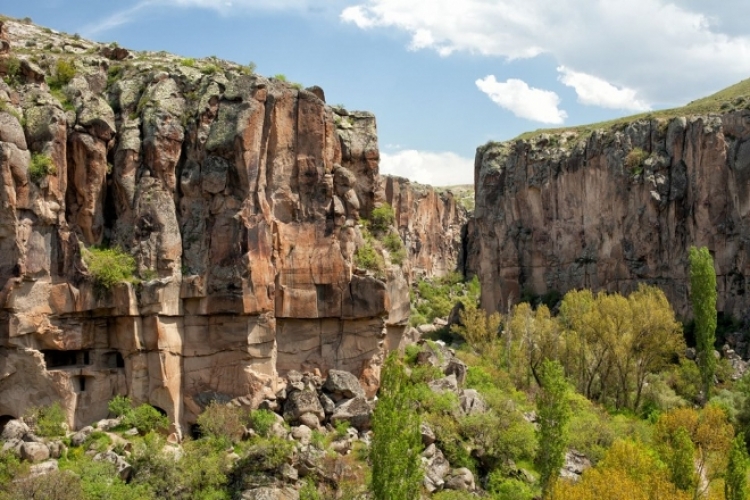 The Jewel of Cappadocia

The Ihlara (Peristremma in Antiquity) Canyon is one the most popular destinations of the whole Cappadocia Region and the visitors may enjoy marvellous natural beauty and cultural riches side by side. The natural beauty was carved by forces of nature with the care and elegance while the chapels and churches were carved with great patience and grace and adorned with frescoes with a great mastery of generations past. Undoubtedly the visitors will love the Ihlara Canyon where beauties of nature, history, art, and culture have been combined, and wish the timeless moments enjoyed would never end.

An Unforgettable Walk Through Historical Riches and Natural Beauty

The 14 km (9 miles) Ihlara Canyon is the longest hiking route of Cappadocia. You may have tackled various routes across the world, however, you would find the Ihlara Canyon is an ideal track passing through natural beauty spots and historical heritage where every turn would bring a surprise. The Ihlara Canyon was carved by the Melendiz Stream (Potamus Cappadocus in Antiquity) over the ages, in some places up to 200 m (660 ft) deep, and the stream would show you the way along the route. The soft rock bed or tuff (consolidated volcanic ash) carved by the stream was laid by the eruptions of Mount Hasan (Athar in Antiquity) volcano. Altogether the canyon was the result of combined effect of natural forces. The beauty of chapels and dwellings carved by reclusive monks who settled in the cliffs merge with the vistas provided by the nature to make the canyon a remarkable route for hiking.

A Crossroads in the History of Christianity

The first settlements and initial structures were dated back into Roman era; however the Ihlara Canyon found its identity during the Byzantine period. Ihlara became an important religious centre during the early Christianity. Some of the churches of the canyon were from that early period of Christianity. The Ihlara Canyon was the learning ground for great theologians of the Early Christianity, such as Basil of Caesarea (also called Saint Basil the Great) and Gregory of Nazianzus. The monasteries and churches carved into tuff were adorned with historically significant frescoes depicting Biblical stories and lives of saints, painted with unmatched artistic mastery using natural dyes. For the early Christians building their places of worship into secluded areas was a very important prerequisite, and visitors of the Canyon would realise how Ihlara provided an ideal setting to cater that need. However, carving churches did not end at that era, and many churches have been carved and adorned with frescoes during the Byzantine era as well as long after the domination of the Seljuk Empire over the region. The Selime Monastery which is the largest monastery of Cappadocia Region is also there. Ihlara Canyon is a site where exceptional historical heritage such as those rock hewn churches that has arrived to our times almost intact could be visited.

Alongside the monasteries and churches carved from rock since the 4th century AD, there are carved dwellings in the Canyon, and the tradition of carving worshipping spaces out of rock has continued during the Byzantine era as well as during the Islamic domination of the region. The mosque of Ilusu town, where a Roman bridge and bathhouse could also be visited, is one of the prime examples of that centuries old tradition.

Visitors of Cappadocia who are familiar with the meagre plant cover of the steppe are astonished when they see the lush green cover of Ihlara Canyon. The microclimate of Canyon is quite different from its environs, and it enables growth of various plants and trees which create a secluded paradise. For visitors of Ihlara Canyon, Belirsırma is the most remarkable village. In the village there are many options available to enjoy a meal on either banks of Melendiz Stream listening the bird singing amid the greenery of the Canyon. 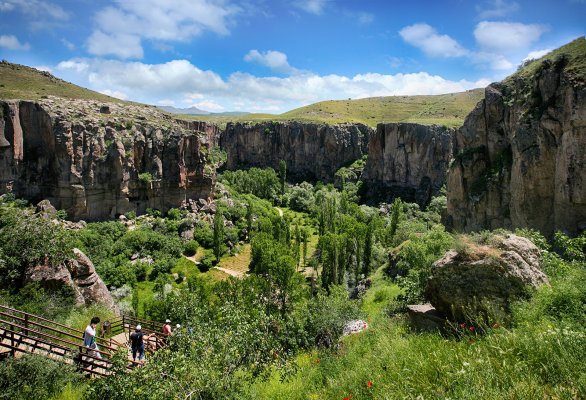