HAMAMONU: THE LIVELIEST PART OF THE OLD ANKARA 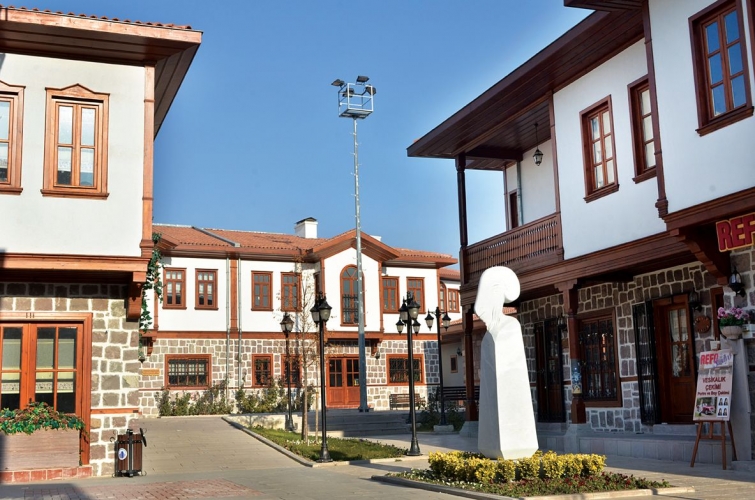 Ankara has been on the intersection of the historical routes and its strategic location assumed a new importance when the city became the capital of newly established republic. Afterwards Ankara has developed quite rapidly and became the second metropolis of Türkiye. Nevertheless the old Ankara has maintained its identity and there are some neighbourhoods still charms with its historic features. Among them the principal features are the citadel of Ankara and Hamamönü neighbourhood (literally, quarter around the bathhouse).

The history of Hamamönü neighbourhood goes far back from the era when Ankara became the capital city, and its core is believed to be built in antiquity. The neighbourhood has become a centre of tourism since the award winning restoration work was completed. In 2011 Hamamönü became an EDEN (European Destinations of Excellence) awarded destination, and became one of the most visited sites in Ankara by domestic and foreign visitors. Despite being a very centrally located neighbourhood in Ankara, it was insulated from the crowded and noisy life of a big city, and attracts visitors to its quiet charm of olden times.

Hamamönü displays the structure of a neighbourhood of late Ottoman era and early days of Republic and the houses incorporate the features of Ottoman civic architecture. As a whole it presents a sample of old Ankara to its visitors. Alongside the houses restored so well to create a feel of visiting intricate streets of an Ottoman neighbourhood, there are major structures such as the Karacabey Hamamı (The bathhouse commissioned by Karaca Bey in 15th century), Taceddin Sultan Mosque, and Hacı Musa Mosque. Besides its civic and domestic structures reflecting the Ottoman era, Hamamönü was also renowned as the habitat of the significant politicians and artists of the early republic. For example, famous poet of the period Mehmet Akif Ersoy, lived in the neighbourhood and wrote the lyrics of Independence March, the national anthem of Türkiye. His house was near the Karacabey Hamamı, and it was restored as a house of culture open to public in Mehmet Akif Ersoy Park. The townhouses shared as the residences by first members of the parliament, are also open to public.

Hamamönü is best defined as one of the the busiest centre of arts and crafts in Ankara with many cultural activities taking place. Along the Sanat Sokağı (Arts Street) visitors could observe artists and crafts people working on their traditional arts and have an opportunity to purchase their creations as souvenirs. Also available to purchase are locally made items displayed at the handicrafts market. On weekends live music and audio-visual shows are available in Hamamönü and while it could be enjoyed throughout the year, the best time to visit is Ramadan period, when fasting month festivities and diverse activities are held every evening.

Hamamönü takes its visitors through a journey back in time, and provides opportunities to enjoy diverse cuisines of various regions. There are many shops, cafes and patisseries where visitors could enjoy a cosy meal in a friendly atmosphere. While specialist restaurants provide unique dishes from traditional Turkish cuisine, there are many restaurants offering an international menu.

Ankara´s Esenboğa International Airport has scheduled flight connections to many countries. Hamamönü is in the boundaries of Altındağ County in central Ankara and easily accessible. It is 10-15 minutes taxi ride away from the intercity coach terminal and from the central train station.