ESKISEHIR: A BLEND OF OLD AND NEW 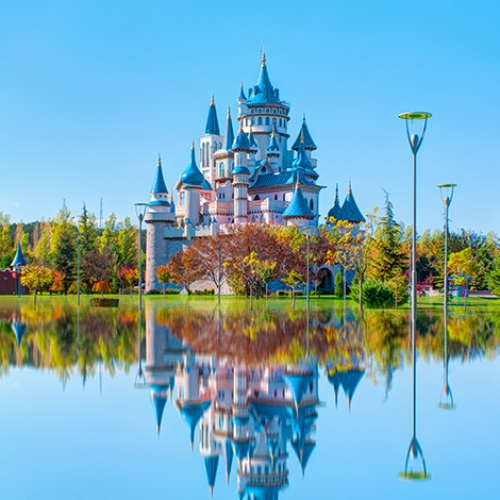 With its rich history, Eskişehir has become a well-known European city in Anatolia, whose cultural richness encompasses both the past and the present.

Excavations carriet out in Şarhöyük, thought to be the first area of settlement in the city, prove that Eskişehir has a history dating back to 3000BC or earlier. It is possible to take this provenance even further back if one takes into account the findings from other mounds around it.

The first civilisation that left significant marks on Eskişehir is the Phrygians, who inhabited this region during the 9th century BC. The most significant traces of them can be found in Yazılıkaya, the Phrygians´ religious centre where many monuments and tombs can be seen.

Eskişehir is also very important in the Ottoman history as its Karacahisar Castle is the first conquest of the Ottomans.

Almost all of Eskişehir´s counties are settlements which are rich in history and culture. Among these is Mihalıççık where Yunus Emre, the pioneer of Turkish poetry, a minstrel and philosopher was born and the Yunus Emre Social Complex can be found here today. Sivrihisar, a significant settlement during the Roman and Byzantine periods, is famous for artworks dating from the time of the Seljuk and Ottoman empires. Besides Akşehir in Konya, Sivrihisar is also believed to be the birthplace of Nasreddin Hodja, a world-famous philosopher. The county of Seyitgazi is well-known for the tomb of Seyyid Battal Gazi, a saintly figure and warrior. Located in central Eskişehir is Odunpazarı, the area where the first city is thought to have been established.

It has old wooden houses which are hundreds of years old, many of which have been restored recently making the area a popular tourist destination. Some of the buildings are now in use as boutique hotels, restaurants and museums and are the most marvellous examples of domestic architecture of the Ottoman period and a must-see for those who want to experience Odunpazarı.

Another important aspect of Odunpazarı is the Kurşunlu Mosque Complex which includes a mosque, şadırvan (fountain for ritual ablutions), public soup kitchen, primary school, madrasah, rest home and two caravansaries – all of which date back to the 16th century. The rest home section of the complex displays meerschaum (lületaşı) artefacts, a stone which is strongly associated with Eskişehir. Exported as raw material during the days of the Ottoman Empire, it is now used for producing exquisite pipes, jewel boxes and jewellery. The Meerschaum Museum, located in the rest home where you can relish the richness of Eskişehir and the skills of meerschaum masters, is one of a kind in the world. After visiting the museum, you can buy pipes, jewellery and other ornaments made of meerschaum at the Atlıhan Handicrafts Bazaar.

The cultural mosaic of Eskişehir is one of the most important elements that has shaped its food culture. Çi börek (deep-fried wafer-thin dough with raw mincemeat filling), learnt from Crimean migrants, is a must-eat during a visit to Eskişehir; traditionally filled with mincemeat, cheese and potatoes are also used as fillings. Another unique taste in the city is met halva, a sweetmeat-like dessert made with semolina or flour. Although not as famous, kuzu sorpa (boiled lamb), toyga soup (with yoghurt and flour), göbete (a kind of pastry) and balaban kebab are among the foods that you should try in Eskişehir.

As an important college town, Eskişehir has two large universities with more than 50,000 students who contribute hugely to the social and cultural dynamism of the city. The city hosts many cultural and artistic events every year. The Eskişehir Festival showcases hundreds of performers and a wide range of theatre performances and concerts.

A popular spot in Eskişehir is the Porsuk River and environs, where you can have a tour of the river by boat or relax in one of the cafes alongside the river.

The Science Arts and Culture Park, with a lake where water sports and other activities can be performed, is especially popular with children and is another recommended venue to visit. Among the attractions that draw visitors are also Wax Museum, Contemporary Glassware Museum, Archaeological Museum, Aviation Museum and Independence Museum which give the visitors the chance to witness the cultural and historical diversity of the city.