AKSARAY: A STOP ON THE SILK ROAD 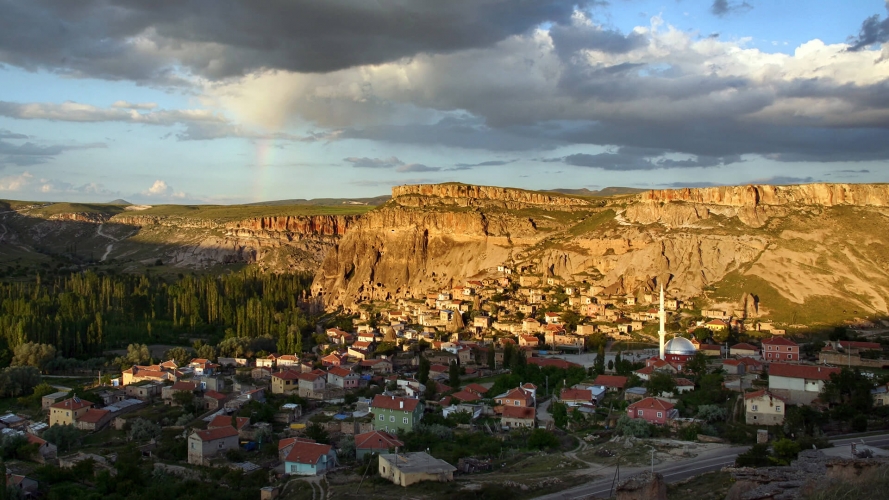 A stop on the Silk Road with countless trails of diverse religions addressing hearts and minds of believers.

Aksaray, with its riches including the Ihlara Valley, spots for faith tourism, underground cities, Salt Lake, Mount Hasandağı, ancient cities and spa centres, is one of the glorious cities of Cappadocia.

Aksaray´s first civilization is recorded as being at Aşıklı and dates from 8000 years BC. At Aşıklıhöyük (mound) can be found the oldest village of the Neolithic period in Anatolia and the Near East.

As an important centre of Christianity´s very earliest days, Aksaray was home to such pioneers as Basil of Caesarea (Kayseri) and Gregory of Nazianzus in the 4th century. A different set of monastic rules to the system used in Egypt and Syria came out of the region. Whereas the monks in Egypt and Syria cut themselves off from the world at large, those under Basil and Gregory did not. Gregory, offering a new explanation for the Holy Trinity, triggered a debate concerning the divinity of Christ and his ideas prevailed at the Council of İznik. Thus, an innovator became a saint for the first time in the history of Christianity. Rock-cut churches dot the rocky region of Belisırma, Ihlara and Gelveri where Gregory lived. Many rock-cut dwellings and churches with frescoes from the early years of Christianity are scattered along the 14km long Ihlara Valley, one of the major tourist attractions of the area.

The formation of the valley began with the volcanic eruption of Mount Hasandağı leaving the surface of the region covered with a layer of volcanic rock. This same volcanic activity produced pressure and heat causing the limestone to crack and create natural hot water springs; these can be seen at the Ziga Springs between Ihlara town and the village of Yaprakhisar. The eruptions also produced tufa outcrops which were moulded by wind, erosion and other natural phenomena creating the indefinable but colourful fairy chimneys that can be seen at the town of Selime and the village of Yaprakhisar.

The Guardians of the Silk Road

With the arrival of the Seljuk Turks in the area in the 11th century, madrasahs, dervish lodges and caravanserais started to appear. Caravanserais were the guardians of the Silk Road and held a prominent place among the glories of Seljuk architecture. Located between Kayseri and Konya which were two important cities of the Seljuk period on the Silk Road, Aksaray was famous for its caravanserais which lent their names to the towns or villages that grew around them. It was also here that the earliest and largest examples of Sultans’ inns were built- structures which would exert a defining influence on Seljuk architecture. The Sultanhanı (Sultan’s Inn) of Aksaray, built in 1229, demonstrates how each Seljuk caravanserai was a work of art besides being a structure for trade and safety.