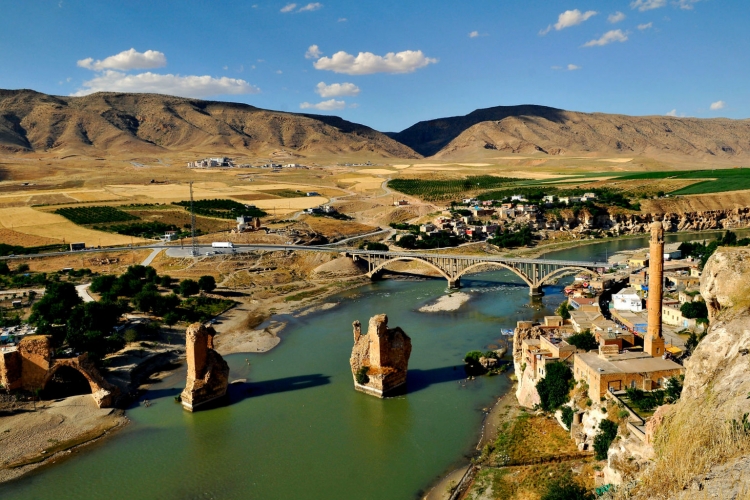 Batman, a museum-like city, is home to the ancient Hasankeyf- a priceless iconic treasure at the Tigris River.

The archaeological excavations which have taken place at the Hallan Çemi Mound in the county of Kozluk near Batman have unearthed various ornaments, animal statues and stone tools, with these items revealing that the first settlement in the Batman region stretches back some 12,000 years. The city has played a significant part in Turkish and Islamic history and culture, and is home to a number of Turkish and Islamic works of art. The city also boasts many castle ruins on its steep hills dating back to the Byzantine period. These include Hazo, Kandil and Rabat castles in the Kozluk county while Pertükan, Bozikan and Beksi castles are in Sason county.

North of Batman the Malabadi Bridge, built in 1147, spans the Batman River. Undisturbed by time, peaceful waters still reflect the widest single-arch bridge of its day. The two guard towers once ensured the bridge’s security.

Lying along the western banks of the Dicle River (Tigris) and standing at the first crossroads where East and West embrace each other, Hasankeyf displays a spectacular combination of nature, history and culture. Throughout history it has been one of the most important places for the rulers of Mesopotamia while thousands of caves formed in the limestone on the rocky hills and in the valleys reveal that the region was inhabited by the first human beings. Having preserved their original appearance to the present day, these cave dwellings are astonishingly mysterious structures with a unique natural make-up.

The most stellar period of Mesopotamia was under Artukid rule after 1101 AD when Hasankeyf became the capital and also one of the most important centres on the Silk Road. It was known as Hısn Keyfa (Rock Castle) at that time. The bridge which once spanned the Dicle (Tigris) River and connected the two parts of the city with the ruined palace inside the citadel evokes the ghosts of a vanished dynasty. The 15th century Zeynel Bey Mausoleum, attractively decorated with turquoise tiles, shows Persian influence.