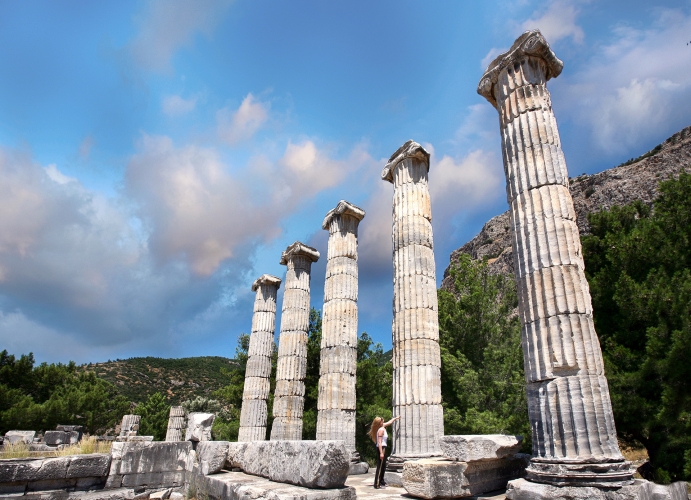 The city of Aydın, the homeland of tasteful figs takes you to the centre of ancient sculptures that inspire the modern arts.

Known as Tralleis in ancient times, Aydın was the centre of a celebrated school of sculpture. The remains date from the second century AD. After 1186, the town came under Seljuk rule. The local museum displays artefacts from the different periods of its history.

Feel the wind of serenity!

Back along the coast Kuşadası, or Bird Island, is a lovely port built along the shores of a glittering bay. The terraced town overlooks the most beautiful inlet of the Aegean and seems to have been created purely for the delight of holidaymakers. Be sure to visit the famous and popular shopping centre in the Kaleiçi quarter, where there is also night-long entertainment. A large, modern marina facilitates life for visiting yachters. The Tusan-Kuştur Beach, north of Kuşadası, is one of the cleanest beaches while 23km south of Kuşadası is the charming holiday-resort town of Güzelçamlı. The Dilek Peninsula National Park, a must see for those who love nature, is situated on the west of Güzelçamlı and 30km from Kuşadası. The park is a wildlife reserve and haven for many species of animals and birds.

Güllübahçe (Priene) was one of the most active ports of the Ionian Federation. The grid-like system of streets, introduced by Hippodamus of Miletus in the fourth century BC, is a superb and early example of town planning.

Milet (Miletus) was a great Ionian port like Priene as well as the birthplace of several philosophers and sages. The theatre itself deserves a visit and make sure to see the well-preserved ruins of the Faustina baths and the Archaeological Museum, too.

Although Didim (Didyma) boasts only one single monument, it is nevertheless a marvellous site. The Temple of Apollo was one of antiquity´s most sacred places and though looted and burned many times, the sanctuary still impresses the visitors with its elegant beauty.

A double-colonnade portico surrounds the colossal temple. Not far from the archaeological site, the beautiful beach of Altınkum tempts visitors with its many guest houses. Akbük is another holiday resort with nice beach hotels nearby.

Set amidst pine, olive and oleander trees, the magnificent Lake Çamiçi (Bafa) is a lovely place for a stop.

Aprodisias (Geyre), the capital of Caria, is one of the most significant sites discovered by modern archaeologists. Although the history of Aphrodisias stretches far back in time, the city dedicated to Aphrodite, goddess of love and fertility, rose to prominence in the first century BC. Some of the richest treasures of ancient times have been uncovered during the excavations of this city. The public buildings are handsomely adorned with marblewhich were carved by astonishing skills- producing remarkable temples, monuments, baths, a theatre and a magnificent stadium. As the reputation of the city´s craftsmen spread through the civilized world for the exquisite finesse of their statuary and marble sculpting, Aphrodisias became the centre of the greatest sculpting school of antiquity. Many of its marvellous works of art are now housed in the local museum. The theatre and bouleuterion are among the city´s best-preserved ruins. The museum is rich in sculptures created by members of the celebrated school of Aphrodisias who worked with the local marble, the best in Anatolia. The stadium, where athletic games were once held, is 262m long and 59m wide and seats 30,000. On the way to the stadium, one can also see the ruins of a building thought to be a school of philosophy. Aphrodisias was indeed an intellectual and cultural centre, attracting people who came to study philosophy, astronomy and medicine.