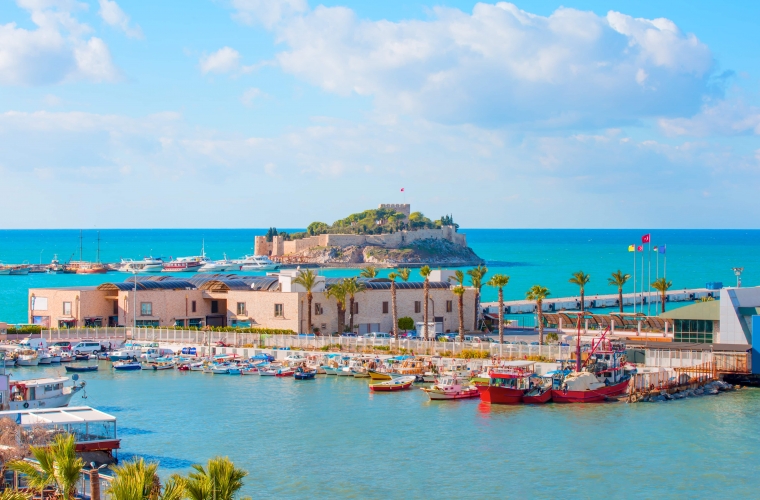 Dominating the gulf bearing the same name in the Aegean Coast, Kuşadası is one of the most popular tourist destinations in Türkiye. Thanks to its clear sea, beautiful nature, harbour and proximity to the ancient cities, Kuşadası has been one of the earliest tourism destinations and it still continues to be popular with its lovely beaches, sun, cool breezes, restaurants serving delicious Aegean food and top quality hotels. Besides many outdoor activities such as trekking and scuba-diving, Kuşadası with its entertainment facilities is a lovely holiday resort to suit all expectations.

History Buffs Will Love This Destination

Through thousands of years, Kuşadası has been an important harbour city. Due to its strategical importance, the city fell under domination of different civilisations; even for a while it was home to the most famous pirates of the Mediterranean. Built in 1618, Öküz Mehmet Pasha Caravanserai proves that the city was a trade centre during the Ottoman Empire. Hosted merchants from different nations, soldiers in military campaigns and adventurous travellers for hundreds of years, the caravanserai today serves as a hotel for visitors who want to stay for the night in a historical atmosphere. Kaleiçi Mosque is also another Ottoman Structure in Kuşadası.

One of the most beautiful spots in Kuşadası is Güvercinada or Pigeon Island, which is attached to the mainland by a causeway and is home to a fortress, built in Byzantine Period. Literally meaning ‘Bird Island’, Kuşadası takes its name from this tiny island, once a shelter for pigeons. The fortress, surrounding the island, was later rebuilt by Barbaros Hayrettin Pasha, the famous admiral of the Ottoman Navy. Among local people this fortress is also known as "Pirate Fortress" because it was used to protect the harbour from the pirates for long years. Besides historical structures, visitors should also visit the famous and popular shopping centre in the Kaleiçi quarter, where there is also night-long entertainment.

There are many ancient cities and ruins that history buffs will love in and around Kuşadası. Among these are the ancient city of Pygela with healing waters which was established by Agamemnon, the King of Argos; the ancient city of Anaia, a shelter for ships for many years; the ancient city of Panionion, the sanctuary for Ion cities; Neopolis, which was thought to be the first settlement in Kuşadası; Ilıca, famous for Roman baths; it is also possible to visit the popular cities of the ancient times including Teos, Priene, Milet, Aphrodisias and Didyma. Kuşadası is a good base for those wishing to visit Ephesus, one of Christian pilgrimage sites with a drive of approximately 30 minutes.

The Dilek Peninsula National Park, bordering Kuşadası together with Söke, is a must see for those who love trekking in nature, photography and ornithology. As being a wetland housing many lagoons and marshy areas, the National Park is a natural habitat for more than 200 bird species including Dalmatian pelican and Pygmy cormorant, endangered animal species and endemic plants. Lying to the sea, the park is a nature heaven with amazing coves.

Kuşadası has a blue flag sea and many beaches beautiful from each other. Kuştur Beach which is next to the ancient city of Pygela is one of these lovely beaches open to the public. Yeşil Beach is one of the most preferred beaches for the regular visitors of Kuşadası. Kadınlar (Women’s) Beach is very close to the district centre. During the Ottoman Period, only women were allowed to swim here. 12 km long Sevgi Beach has running and cycling tracks.

As a natural shelter for ships through history, Kuşadası Harbour was the place where the goods from Anatolia and even Far Asia were sent to Europe by sea. Today, Kuşadası boasts its marina as it is one of the earliest and most well-equipped marinas in Türkiye. Visitors should not miss visiting the nearby islands and coves by yacht tours.

Located in the city of Aydın in the Aegean Coast of Türkiye, Kuşadası is at a distance of 82 km from İzmir Airport. From different cities, travelling by road is possible.