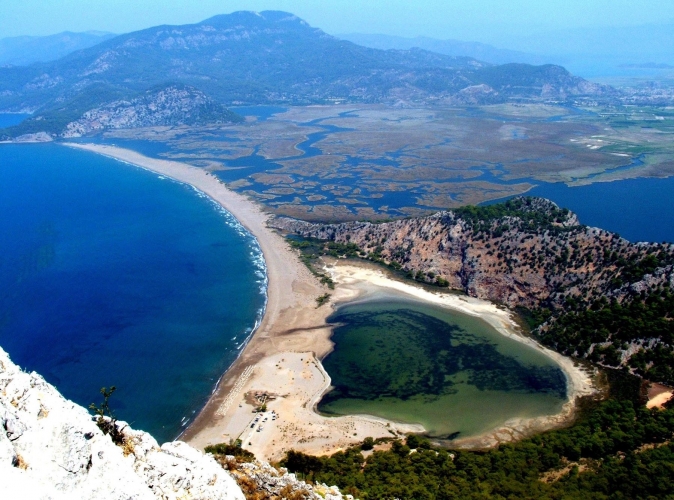 Awarded international prizes in different categories including Europe’s Best Beach Destination and Europe’s Best Open Space, İztuzu is a very popular beach in Dalyan. Besides its natural beauty, İztuzu offers visitors a unique experience. Thanks to its location between Lake Köyceğiz and the Mediterranean, it is possible to swim in salt or fresh water. Visitors mostly prefer to enjoy the fresh water of Lake Köyceğiz after swimming in the Mediterranean and sunbathing on the golden sands of İztuzu.

İztuzu Beach with its fine sand is also known as a natural nesting ground for Caretta Carettas. Therefore, it is called Turtle Beach. Since Caretta Carettas are under protection, the beach is closed for visitors at certain hours of the day. 5 km long natural conservation area İztuzu Beach is an ideal place where visitors feel alone from everyone and everything and listen to the sound of the waves although its west and east parts can be crowded from time to time.

Dalyanağzı Beach, the west end of İztuzu can be reached by boats from Dalyan through long and curvy channels. This boat trip which will lead you to a dreamlike beach is itself an enjoyable experience. One of the stops on the way is for mud baths, thought to beautify your skin. Next stop on this exciting trip is the ancient city of Caunos and the rock tombs. History and archaeology lovers will find so much to see in the ancient city of Caunos which was once a harbour city. However, the harbour mouth got blocked with sand and gravel carried by the Dalaman Stream when its course was changed due to an earthquake in the 3rd century BC. That is how nature’s miracle İztuzu Beach was formed. Visitors who prefer going to İztuzu by highway will be accompanied by amazing scenery including hills covered with colourful oleander flowers that do not fade during the summer, pine forests and Sülüngür Lake where the most beautiful sunset can be viewed in Dalyan.

The ancient historian Herodotus mentions the ancient city of Caunos as a place where salt and salted fish were sold. He says that this salt, obtained from seawater by evaporation, is used in the preparation of eye salve and beneficial for the skin. Recent research has also shown us that the salt pan, mentioned by Herodotus, is the one in İztuzu. Survived to the present day in good condition, it is important because it is the first ancient salt pan discovered in the world.