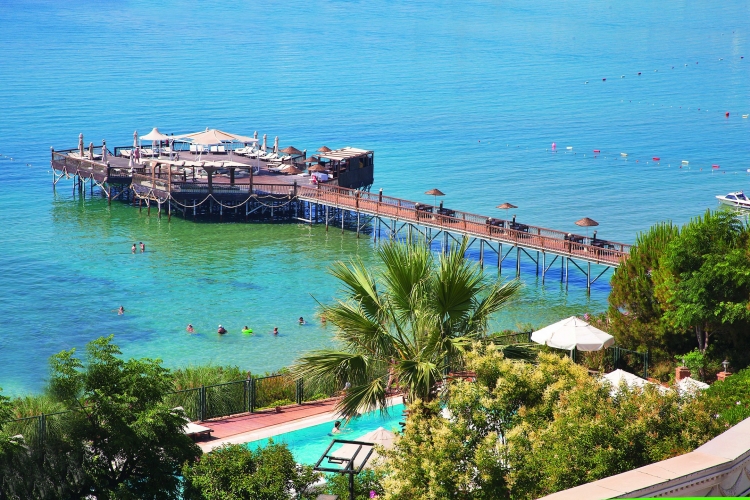 Didim, an hour’s drive from the city of Aydın, is one of Turkey’s prime holiday destinations. It has a rich cultural heritage, golden beaches, and a coast of intricate coves, each a wonder of nature. The Temple of Apollo in Didim is one of the largest and best-preserved temples of the ancient world. There are few better beaches on the Aegean coast than the beautiful Altınkum, and it’s easy to hop on a boat trip to one of the picturesque coves to enjoy a swim. Fascinating ancient cities and gorgeous natural wonders await you. Didim is not a run-of-the-mill summer resort: the tourist attractions are only the start. The vibrant life of the city continues well after the summer season closes down. Large communities of ex-pat Europeans, especially the British, have settled in Didim, and consequently the shopping centres, market and supermarkets are full of bustling international activity year round.

Ancient Didyma was home to one of the most famous oracles of antiquity. The sanctuary was part of the illustrious city of Miletus. Visitors anxious for a vision of the future flocked to the “Sanctuary of Oracles”. The Temple of Apollo honoured the god of the sun, arts, music and prophecy. It became one of the most respected oracles of the ancient world, where visitors eagerly listened to cryptic omens of the future passed down by the oracles.

The founding legend of the Temple of Apollo concerns the shepherd Branchos, who learned the secrets of prophecy from the god himself. The temple was originally built in the 8th century BC, and the sanctuary was administered by the Brahchiadae, who claimed descent from the legendary Branchos. Over time the oracles became famous for the accuracy of their predictions, visitors included statesmen from far away nations who consulted the oracle on matters of state and plans for war.

The Persians demolished the temple in 494 BC to punish the Ionian uprising. Following the arrival of Alexander the Great, who stopped in Didyma during his quest to conquer the known world, the temple was rebuilt in a more grandiose fashion. Construction began in 300 BC on the orders of Seleucus, one of Alexander’s commanders, and lasted for many years. The rebuilt temple was even larger than the original and complemented by diverse ancillary structures. When Christianity started to spread in Anatolia the reconstruction work was abandoned, unfinished. The temple was no use to monotheism, and when the local population adopted Christianity oracles and fortune tellers were banned and severe punishments were promulgated against those involved in suspect activities. The new religion banned the oracles from their traditional activities in the sanctuary. Earthquakes chipped away at the structure - including a devastating 14th-century tremor. However, the present day ruins give a strong impression of the temple’s original grandeur.

Today only a few columns stand upright, but the renowned Temple of Apollo was once the third largest sanctuary of the ancient world. The original structure had 124 columns in double file, and the roof was almost 20 metres high. In many aspects, including its original layout, the Temple of Apollo was different from the other temples of the ancient world. The decorations and upright columns that have stood the test of time indicate the meticulous splendour of the temple’s design and execution.

In ancient times, visitors to the temple arrived by sea at Panormos Harbour, which was situated near present-day Mavisehir, and followed the Sacred Way up to the Temple. Both sides of the Sacred Way were lined with statues, many of which were removed in the 19th century. Today the statues are on permanent display at the British Museum. However, a few of the statues have remained in situ and can be seen here today. Along with the temple itself, visitors can see the petrifying Medusa Head, which has become a symbol of Didyma.

One the Best Beaches of the Aegean Sea: Altınkum

The Blue Flag Altınkum Beach, one of the best in Turkey, is only 10 minutes from Didim. The sea is quite shallow here, and the long, wide, sandy beach is well sheltered from the waves, making it popular among families with children. The shore off Altınkum is suitable for windsurfing, canoeing, and other water sports. Large waves are only seen during winter swells.

The waterfront of Altınkum Town, behind the beach, is lined with entertainment facilities, restaurants, and hotels that make the town a popular resort.

Centre of Science, Culture and Arts in Antiquity: Miletus

The ancient city of Miletus is situated on the road between Didim and Soke, near the Balat village of Didim. In antiquity, Miletus was renowned for the famous philosophers it produced. Foremost among them was Thales, who has been recognised as a precursor of philosophy and the sciences. Thales contributed greatly to the development of the natural sciences, astronomy, mathematics and geometry. He correctly calculated the solar eclipse of 585 BC, and developed a theorem that is still used today. Another important philosopher of Miletus is Anaximander who developed ideas about the formation of the universe. His disciple, the philosopher Anaximenes, contributed to the idea of evolution. These philosophers were the pioneers who laid the foundation of the Milesian School, which later formed the basis of the thoughts developed by philosophers such as Socrates, Plato, and Aristotle.

Miletus maintained its prime position in science and culture for thousands of years. The great 6th century architect, Isodoros, who built the magnificent Hagia Sophia cathedral in Constantinople, present-day Istanbul, was born and raised in the city.

Maritime trading propelled the development of Miletus and it became an important centre of commerce. Many ancient structures have reached our times in quite good order. The most prominent of them are the Grand Theatre, with seating capacity for nineteen thousand, the Temple of Athena, and the Faustina Bath, which was one of the largest of ancient bathhouses. The city’s agorae, ports, and temples are also fascinating.

Miletus maintained its strategic importance for centuries and eventually came under Seljuk dominion. After the collapse of the Seljuk Empire, it became the capital of the independent principality of Menteseoglu Beylik. Later still the city was incorporated into the Ottoman Empire. The most important structure dating from the era of Turkish domination in Miletus is the Ilyas Beg Mosque, which was built in 1401.

Akbük is 20 kilometres from Didim and a heaven for visitors providing varying accommodations, entertainment facilities and beaches suitable for every budget. A fine tourist resort Akbük is an alternative to Didim, and there are many small and beautiful coves along the coast. These emerald coves with their turquoise seas are just the ticket for water sports. The best-loved beaches of Akbük are the Saplı Ada and Sahte Cennet beaches.

There are many natural beauty spots in the vicinity of Didim. A perennial favourite is Altinkum beach. Another spot of outstanding beauty is Lake Bafa Nature Park, 30 kilometres from Didim. The lake was, in ancient days, part of Miletus Bay. The lagoon gradually filled with silt and formed the lake. The lake now provides a habitat for many birds, including several endangered species. Occasional boat trips are organised on the lake.

Lake Bafa is surrounded with olive orchards and pine forests, and its shores are suitable for those who wish to stay away from the crowded cities. Walks on beautiful trekking routes around the lake provide photographers with a visual feast and superb vantage points.

Alternatives available for visitors to Didim...

History Enthusiasts: There are many important ancient settlements in the vicinity of Didim. Visitors staying in Didim can easily make day trips to such fascinating and famous sites as Preine, a significant port city, and the Heracleia of Latmus, which is renowned for its Temple of Athena, the agora structure, and many other ancient structures.

Boat Trips: Daily boat trips allow water-loving visitors to get their fill of the sea. These boat trips stop at several beautiful coves and allow visitors enjoy a swim in the turquoise sea, before enjoying a delicious lunch served back on the boat. The routes generally include the following coves: Cennet Adalari, Haydar, Dalyan, Gumus, Cennet, Gaye-2 and Akvaryum. The water in these coves is crystal clear and the depths can be seen clearly from the surface. Swimming in these clear and clean waters is an experience to cherish.

Festivals: Perhaps the most important festival in Didim is the White Gold Festival organised at the Akyenikoy Neighbourhood in the first week of April each year. Visitors who attend the festival will be able to watch ancient Turkish games, such as oil wrestling contests, and the equestrian team sport Jereed. The festival attracts many local people of Akyenikoy and quite a large group of domestic visitors, and provides an alternative for those who would like to learn about a different aspect of life in Turkey.

Nearby Holiday Heavens: Didim is conveniently close to several of Turkey’s other great tourism centres. Day trips from Didim take you to Bodrum and Kusadasi, and allow you to experience different aspects of the Aegean Sea, its culture and the fantastic entertainment facilities that dot the seaside towns.

Airlines: Those travelling to Didim by air should either fly to Bodrum Airport, which is 90 kilometres from Didim, or to Izmir Adnan Menderes Airport, which is 150 kilometres away. From Adnan Menderes Airport there are taxi and bus services to Izmir. At the coach terminus of Izmir there are regular services to Didim. There are also trains departing Izmir central station towards Aydin. Alight at Soke station, and enjoy a short bus ride to Didim. 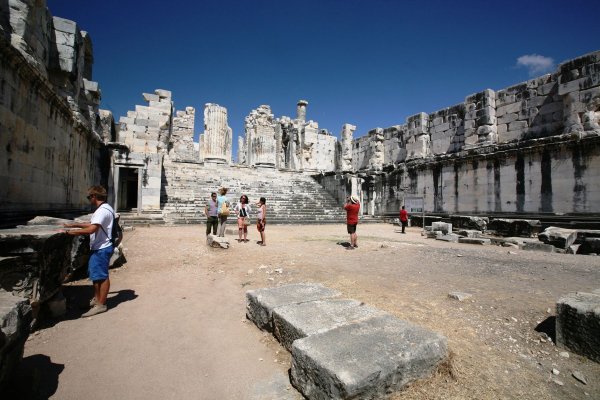 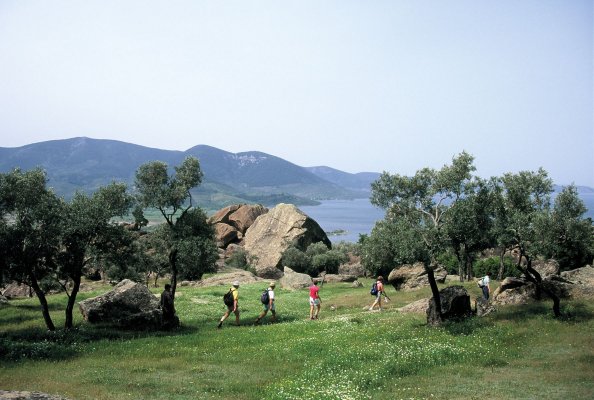