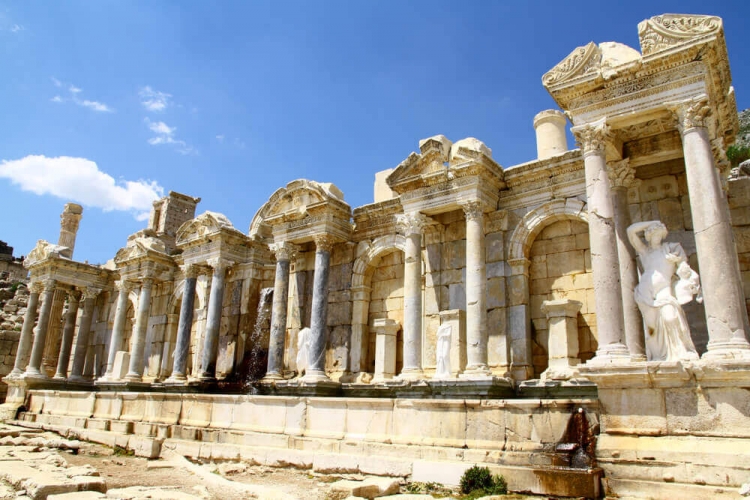 Burdur has ruins from many civilizations, revealing a true combination of various aesthetic tastes.

Burdur preserves excellent examples of Ottoman regional architecture, in particular the Taşoda (now the Ethnography Museum), Kocaoda (also known as Çelikbaş) and Mısırlılar konaks or mansions dating back to the 17th century. Both the interior and exterior decors reveal much of the Ottoman aesthetic. The Burdur Archaeological Museum houses some very important artefacts from around the region.

Burdur Lake, which has nice beaches for swimming, is a superb location for water sports. A climb to the top of Susamlık Hill gives you a panoramic view over the city and lake. The İnsuyu Cave, 10km south on the road to Antalya, is 597m in length with nine distinct pools and chambers filled with stalactites and stalagmites. Kremna (Çamlık) was an important Pisidian city and today contains Roman and Byzantine era ruins; it is 60 km from Burdur. The İncirhan Caravanserai, which was built in the 13th century by the Seljuk ruler Giyasettin Keykubat, is located 7km west of Bucak in İncirdere (Dereköy). At Gölhisar (Cibyra), a hundred kilometres southwest of Burdur, ruins of an important ancient northern Lycian city can be found dating from Roman times; there is a stadium, lower and upper agora, theatre, necropolis and large aqueducts. Enclosed in the mountains of the region and 1193m above sea level is the beautiful Lake Salda, an ideal spot for relaxing and cooling off at one of its sandy beaches or at the lakeside cafes, hotels and restaurants. Also in the region is Hacılar Höyük (mound) with ceramics dating from 5400 to 8500 BC – the site was excavated in 1950s. The ancient site of Sagalassos can be found 33km east of Burdur and 7km south of the town of Ağlasun. As the Pisidian capital, it has ruins from Roman times including a memorial entrance gate, colonnaded street, lower and upper agoras, temple and magnificent theatre.